Today, the majority (> 80%) of new chemical entities (NCE) discovered by the pharmaceutical industry are poorly soluble or lipophilic compounds; as are about 40% of existing drugs in the market. Consequently, this creates major challenges in drug development due to poor solubility, short biological half life, poor bioavailability, prominent adverse effects, and stability of NCE.

Adaptive Focused Acoustics® (AFA®) provides the ability to process a number of different constructs to help overcome solubility difficulties. Using AFA-based systems, both Liposomes and Emulsions are prepared at low processing temperatures without the use of organic solvents. This allows for the encapsulation of temperature or solvent sensitive APIs such as peptides or proteins, which would otherwise be destroyed or inactivated during the preparatory processing. Thus, API’s previously considered not feasible, can now be considered for development. 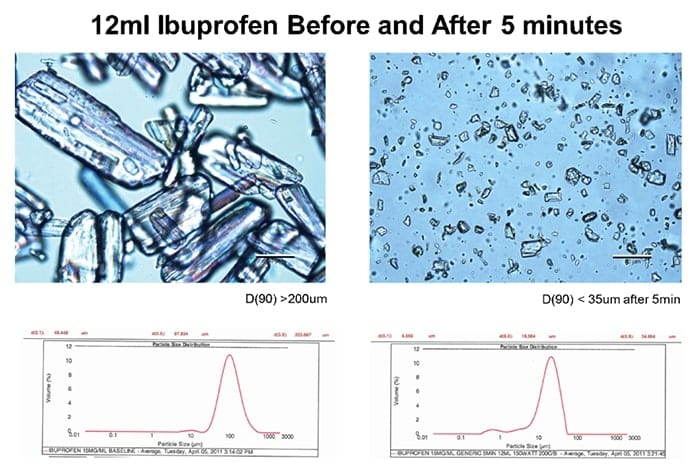 Nanosuspensions have emerged as an effective strategy for the delivery of hydrophobic drugs because of the unique versatility and advantages in formulation. AFA can be used to create nanosuspensions through the complete life cycle from discovery through first human trials. By enabling closed vessel, contamination free wet milling in a scalable manner, early-stage compounds can be dosed and evaluated, without extensive Formulation development, with a very minimal amount of material. Subsequent trials can be completed with the same technology through the preparation of larger volumes of nanosuspension sample material.

The Covaris Focused Ultrasonicator has successfully demonstrated the ability to mill small volumes of early stage material into nanosuspensions suitable for animal dosing. Volumes as low as 100ul are possible with 100% recovery of the material.

SEM before and after wet milling

AFA can be used to control nucleation and crystal distribution. Other benefits of AFA technology for crystallization include: 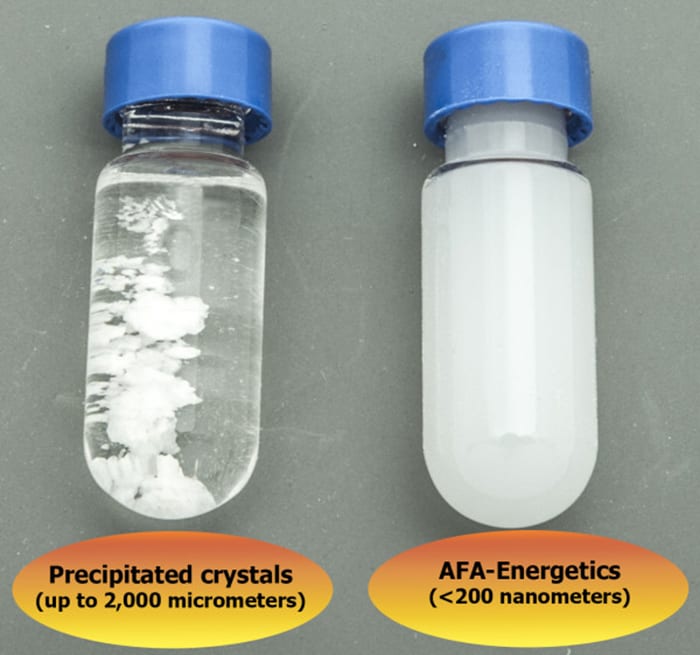 Liposomes are being used to deliver a number of different active pharmaceuticals for both small and large molecule API. Traditional liposome preparation methods include detergent depletion, ethanol injection, reverse-phase evaporation and emulsification. Processing methods include high-pressure homogenization, extrusion, and conventional ultrasound. The major disadvantages of these preparation methods include the consumption of large volumes of volatile organic solvents, multiple lengthy steps and degradation of the sample, and subsequent loss of bioactivity, due to heat exposure.

Adaptive Focused Acoustics® (AFA®) technology offers a breakthrough alternative to traditional methods, by forming monodisperse liposomes at 4°C (below the lipid phase transition temperature) and eliminating the need to use organic solvents.

Fully scalable from 100µL to continuous flow manufacturing, AFA-Liposome formation is possible across a range of lipids and formulations, including the addition of cholesterol and other difficult to load materials. Active ingredients can be loaded into the AFA-liposome at the time of formation, allowing a very simple and effective, one step formulation within a matter of minutes, without the risk of cross contamination or the need to cleanup.

Nanoparticles have been shown to be effective Drug Delivery Systems because of their biocompatibility and biodegradability. Nanoparticles act as potential carries for several classes of drugs such as anticancer agents, antihypertensive agents, immunomodulators, and hormones; and macromolecules such as nucleic acids, proteins, peptides, and antibodies.

AFA can be used in the emulsification steps of PLGA nanoparticle formation, to achieve monodisperse particle size distributions as small as 80nm. Additionally, the intense yet highly controllable mechanical energy of AFA allows the use of mild solvents, such as triacetin, in AFA-Nanoparticle formation. Combined with inherent low temperature processing, AFA-Nanoparticles are formed using temperature and solvent sensitive materials that would degrade with traditional processing methods.

Nanoemulsions have become an important delivery system for the controlled delivery of pharmaceuticals and cosmeceuticals, and for the optimized dispersion of active ingredients in skin layers, as well as ocular delivery of active molecules.

AFA allows the construction of tightly distributed nanoemulsions achieving average mean particle sizes as low as 20nm. Volumes ranging from 100µL through continuous flow processing are possible, and all processing is done in a closed, sterile vessel at a controlled temperature. Tight temperature control enables the encapsulation of sensitive biological molecules such as peptides and proteins, without degrading bioactivity due to heating that alternative methods require.

Particle size and distribution can be controlled automatically via the acoustic processing parameters, to maintain a high quality output product.

Protocols for AFA liposome preparation at 4°C and construction of tightly distributed nanoemulsions.

Protocols for using AFA to control nucleation and crystal distribution.

Get new product announcements, protocol and software updates, and more delivered to your inbox